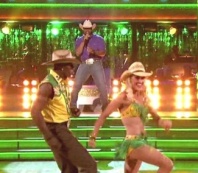 Yes, once again I am ahead of the pop culture curve.  In March of this year when I was in India I met the company that owns rights to the “Dancing with the Stars” TV show.  I had told them they had picked a winner in my boy Donald Driver (Packer wide-receiver; future hall of famer).

So guess what?  Donald wins!  His award?  The prestigious Mirror Ball trophy.  It is a replica of a dancing mirror ball on a trophy stand.  But the prestige of being winner of this coveted prize is…priceless.  We did watch the last few episodes this past week.  And yes, we’re a bit biased being from Wisconsin and all.  But Donald was good!!  And when he pulled off the free-lance Cowboy Troy country dance it was Katy Bar the Door!  (an American phrase meaning “get ready for trouble”).  I thought it was Katy By the Door but what do I know.  Anyway, bringing in Cowboy Troy was genius.

Donald is the Packers slot receiver.  He is the guy that goes up the middle, turns left, catches the ball and then gets pummelled.  He then pumps his hand in his patented first down move, goes back to the huddle and then does it again.  In Green Bay and Cheesehead land in general Donald is an icon.  Between his smile and personality on and off the field he can’t go wrong.  And now he’s a Mirror Baller (#mirrorballer).  Untouchable.

I had forgotten about Cowboy Troy up until this.  But I think the song he picked was “I Play Chicken With The Train” by Cowboy Troy.  I’ve attached that video below for your viewing pleasure.  He is on my playlist and very run-able.  He is kind of  hip hopster turned country to cash in.  But in the end, who cares.  He sounds good and that song is catchy.  Go check it out.  And if you want more go check out The Lacs (on iTunes) while you’re at it.  Same kind of stuff.

Thank god I didn’t watch “Dancing with the Stars” entire season.  The America’s Funniest Home Video guy is the host and tells all the same corny jokes.  I’m surprised he doesn’t say something like “…and here are some videos of talking dogs dancing while doing the moon walk on the trampoline”.   That is how I picture him.  I just can’t take him serious.  And his guest host is someone from the 1999 “Wild On!” show.  I knew I remembered her.  She’s also tough to take serious but I cut her more slack for some reason.

I’ve also attached a little clip of Aaron and Clay who were filmed rooting for Donald as well.  Those guys crack me up.  I see more State Farm in both of their future.  Add one Mirror Baller to the mix of the State Farm ads.  Maybe Donald dancing around the locker room or something.  If you gave me a few minutes I’d come up with several tu-tu type ads worth showing.  There is even a Discount Double Check move by Clay in here.  That never gets old.

Running Update:  On the bench again.  I had open Sports Hernia surgery last week.  So it’s two weeks of walking up and down the hills of Cambridge, a week or two of gym bike and then back in the saddle.  Next race – London 10K on July 8th.

Aaron and Clay (no, not the two in the picture but in the clip):

Comments Off on Mirror Ball to Titletown USA! |

Only 12 More Days of School

Leave it to the uncluttered minds of my kids to get me thinking.  We have this whiteboard on our wall as you enter our house from the garage and it is fair game for a “posting” of any sort.  It’s kind of like a poor man’s Facebook status update.

So, one of my kids posts “Only 12 More Days of School” on it the other day.  And then they subsequently updated it each day with a reduction in the days (we’re now down to 10).  I don’t think there is anything that odd with that but what got me thinking was what did we do before Facebook and Twitter to let the world know what we’re thinking?  I mean if it’s in my brain it should theoretically be told to the rest of the world.  Right?  What was the first thing that came into my mind when I read their “post” on our whiteboard?  How many more days until retirement.  I figure I’ve got about 10 more years in me if all goes well. Well, I accidentally multiply 365 x 10 and come up with 36,500 in my head.  (That MBA really paid off.)  I put a status “post” of my own on our whiteboard with this number up in the corner saying “Only 36,500 More Days of Work”.

I bet I walked around depressed for at least a day or two.  But then a miracle happened.  My mathematically savvy wife (no MBA required) fixes my “post” and puts 3,650.  It was like someone had shaved, I don’t know, 5 or 6 years off my working tenure.  And THEN she makes it even better!  She says even that number isn’t right.  You need to subtract weekends and holidays.  So really it’s like 2,400 days remaining.  I wanted to buy her a new dress or something I was so happy.  She knew she had made my day!  So what do I buy her?  Romantic me buys her a juicer instead.  (Her choice.)

Why a juicer?  Because we are suckers for those Netflix documentaries that tell us how our current eating habits are going to kill us all and we should really just be posting things on our whiteboards like “Only 1,000 Days Left of Life Because of the Processed Pepper Jack Cheez-Its I Just Ate” or “Only 1,000 Days Left Because the fat Australian Guy in Fat, Sick and Nearly Dead Says So”.

That juicer has been sitting on our kitchen table in its orginal packaging, unopened for at least two weeks.  It’s like it is evil or something.  You have to give it room when you walk by and not get too close.  We kind of look at it once in a while or maybe talk about how “next week” we’re going to juice.  It does feel good to know that pretty soon we’ll actually open that thing and add those days back to our “post”.  The ironic thing is we may get days back on our lives, but we’ll have to keep working longer to pay for what one neighbor says takes like $100 worth of strawberries to fill a glass and make a juice shake out of one of these things.  That may actually be ok if I can lose about one bowling ball ahead of this year’s marathon.  (They use 16 lb bowling balls as the analogy for weight lost in the film; the trucker guy in the film lost like 10 of ’em.  How hard can one little bowling ball be?  Time to head to Costco and load up on the strawberry bins!)

Running Update:  If I do end up kicking the bucket early, I want heaven to be a bit like Nashville.  Every where we turned there were unbelievable bands, open air bars and lots of fun to be had.  I’ve never been anywhere like it to be honest.   I suppose you need to like country music but truly they played a bit of everything and played everything about as good as you can play it.  We’re already talking about next year’s Nashville Country Music Marathon/Half-Marathon and several of us have already ordered our curled edge straw cowboy hats with puka-beads to get ready.  We all did the half not the full marathon which was a wise choice given the heat, the hills and the too much fun.  None of us did too bad actually all things considered (including a 1:39:00 run by Ironman; hint: that’s not me)!  It is a great race with 30,000+ runners and several celebrities including Sheryl Crow.  The only negative is the hills.  But other than that, perfect.