Flatulence.  That is the nicest thesaurus alternative to what I recently learned is called “Crop Dusting” in runners vernacular.  Have you ever been in a race and had the headphones blaring and then, wait for it…flatulence.  And then you run as fast you possibly can to make sure they have no idea it was you.  That is called “Crop Dusting” I am told.  And I found that pretty darn funny!  Been there, done that if you know what I mean.

One guy crop dusted me in Nashville.  I didn’t know he did by the sound but by the pungency of his presence.  See how I’m using that thesaurus?  That’s what us runner writers do.  And pungency is what us runners do too.  It’s disgusting I know; but it is natural.  And you don’t even have to worry about it.  Move on people, there’s nothing to see here.

I just wonder if this is a male thing or an equal opportunity thing?  I bet it goes both ways.  It would be one heck of a Survey Monkey survey if I asked questions like “which mile causes you the most flatulence?” or “have you ever looked back after crop dusting someone?” or “does GU make you crop dust?”?  I bet we’d hear from both sexes on this one.

I was “uninspired” until my wife and I both bust out laughing on this particular topic.  So now?   Call me inspired.  People laugh at bodily functions.  That’s just the way it is.  I’m gonna run with it.  No pun intended.

As runners we like to label things – like “the last mile” or “the wall” or “tapering” or “tempo” or “pacing”.  Let’s add some new terms to our runner thesaurus.  How about “crop duster” or “love spreader” or “stinky *astard” or “the rumble in the jungle” or “fart-lek” or “Russian roulette” or “carb bomb”?  I could go on all day.  I just know that virtually any sentence or any joke with the word fart in it makes me chuckle.  So next time you’re crop dusted, just smile and slow down a bit.  You can thank me later.

Running Update:  Back on track.  24 miles this week with a 9 mile trail run in Jackson, GA of all places coming up.  I hurt.  I take a lot of ibuprofen.  And I stretch more than I used to.  But I’m running again so away we go.  Official plan is in place and I am on track to kick my fellow crop duster, N. Moro, in the arse in Savannah.  He’ll be the one slightly behind me as we cross the finish line.  That mental image inspires me.

The travels have begun again in earnest.  I was in Argentina, Chile and the UK all in the span of the last ten days.  Can you say jetlagged?  What the heck is jet lag anyway?  I looked this term up in the Urban Dictionary as I figured since I liked this phrase so much it must be used by the cool hipster underground.  They say it is a euphemism for a hangover.  Ok, so they don’t actually use the word euphemism.  Instead they say “Dude, that stuff we smoked last night was tight but now I’ve got some serious jet lag.”  You can always count on the Urban Dictionary folks to clear things up.

That picture above?  That is the Tower of London.  I took this shot Wednesday night of this week when we brought a bunch of our biggest UK customers on a guided tour.  I’m sure many of you have hit this same tourist destination on your visits to London.  It doesn’t get old;  what an awesome place!  And to top it off this week we saw all the crown jewels without the masses and a Beefeater guy explaining how big each of the diamonds are and such.  But the best part of the jewel tour was to see the very same crown the Queen wore earlier that day as she opened Parliament.

This Wednesday, May 8th, was a big day at the tower.  Besides the Queen stopping by to pick up her crown, they were holding the Tower of London Run.  It is a 1k up to 10K run in the Tower’s moat.  It is the oldest running event in London and looked awesome.  I wanted to get out of my monkey suit and into a red Tower of London Run t-shirt and jump the fence!  Maybe next year. 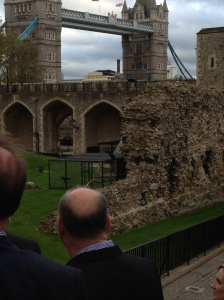 A little trivia for you blog followers – did you know that if the ravens that live at the Tower were to leave one day the entire country would fall apart?  I guess that is why they have one in a cage now to protect against this?   The last time I was here I completely missed the ravens for some reason.  There is even one named “Jubilee” who was given to Queen Elizabeth this past year to mark the event.  And once a week they enjoy an egg and an occasional rabbit.  Who’d have thought, right? 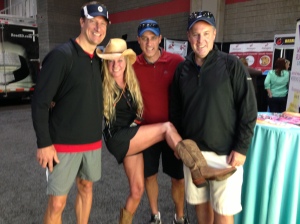 Running Update:  I have really fallen off the wagon when it comes to running (other than a recent Nashville Country Music Half Marathon) but I do have a new Google Drive training plan that takes me through November 9th where I’ll run the Savannah Marathon again.  I guess given the travels I have an excuse including my complete annoyance with treadmills and having to convert kilometers to miles in my head since that is all they have in these other countries.  My best run of the year so far was in Chile as I was able to run four miles in a park that sits at the base of the Andes.  It was a holiday there so the park was full of families and food vendors and dogs and normal Chilean life.  They live in a very beautiful part of the world.  If I ever get a chance to go back I’ll be blogging about my time running in Patagonia.  Bucket list.  Oh, and I have no idea who that cowgirl is in our picture from the Nashville Country Music Half Marathon expo.  She worked for Women’s Running and was promoting for subscriptions I suppose.  If it works for their magazine I figured it can’t hurt with the blog.