And that’s it folks.  The show’s over.  Wally World is closed.  This is the end of the line for the Boston or Bust! blog.  I’ve been at this for a long time.  I documented my first marathon in Run. Fat Bastard.  Run.  (www.rfbr262.com).  Soon after I decided the next big goal had to be Boston.  In fact in my very first post in this blog in November 2011 I said “only 41 months and 26.2 miles to go…”.  That is how long I thought it would take between when I said I’d do it and April 2015.  Fate intervened and gave me the good fortune to join a charity team called Running for Cover raising funds and awareness for the Melanoma Foundation of New England.  It allowed me to obtain a bib number and run this year – 2014; the 118th running of the Boston Marathon.  My goal was running the Boston Marathon but by being part of the team raising awareness for Melanoma and funds for an organization that is doing incredible things I was given more than just the gift of the Boston Marathon; I was given the gift of establishing inspiring new friendships all over the country and the gift of giving back to this cause.  I am incredibly blessed.

I know most of these blogs have been a bit verbose so I thought you’d rather see the event in pictures and then I’ll summarize my thoughts at the end.

Gourley family in front of the Green Monster and Advil sign (my new best friend after this race). Tribute night at the Red Sox game for the victims and first responders.

I was hoping they would drop the big flag again. So awesome! 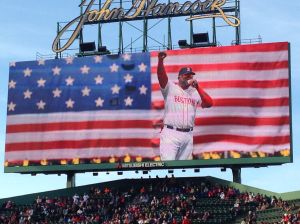 Big Papi! The Fenway announcer says “Remember last year when our Big Papi said this is our (something) city?” He used the word something this time. Not quite the same effect.

Bagpipes, UMASS Marching band, victims, medical staff, police and fire, volunteers, runners all on the field together. Awesome and tear jerking moments throughout.

Adding this one in honor of Team Running for Cover! (on statue just outside of the gates of Fenway) I bought a Red Sox hat and adopted them since I love Boston! So long Braves…

In honor of my wife and best friend and the Melanoma she had to have cut out of her right calf. 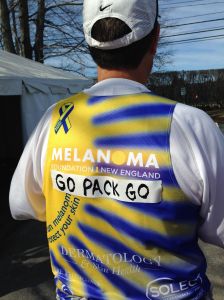 I can’t tell you how many people confused the Packers with NC State along the race. C’mon man!

Walking to start in Hopkinton

My running partner through the first half Nick. He was so close to finishing last year (26 and change) but got to do it this year! Congrats Nick!

Wellesely girls at the midway point. Tradition is to kiss them. 5 was my last count. This killed my time and is where I lost Nick.

I read one quote I very much agree with. “There’s never been a day like this, there’s never going to be another one. Might as well stay out here and enjoy it as long as possible.” – Amby Burfoot, the winner of the 1968 Boston Marathon.  I wish I could make yesterday groundhog day and we could do it over and over.  But there will never be a day like yesterday again.  It was inspiring, motivational, brutally hard (especially the not over-rated Newton Hills and where they come in the marathon) and just plain perfect.  And I got to share it with my wife Lynn, daughter Anne Marie and son Adam.  Perfect.  Since yesterday, my team has been busy sharing pictures and stories from the race with each other.  Some people blew away their PRs, some got injured and hobbled in and some just soaked it all in.  I would say I was in this last camp.  I ran a great first half marathon and then when I realized I was dead on time I just enjoyed it all.  (I should have listened to Bill!)  Kudos to the women I kissed, the kids I high fived, the Boston College kids who were leaning over the rails so far they might fall and SCREAMING c’mon Paul!!  But everyone finished this year.  Also perfect.

When we were flying up to Boston we sat next to Carri who had completed 25.5 last year and was returning to finish what she started.  She said (and I wrote it down) “To me there was so much more good that came out of that day [April 15, 2013 – last year’s bombings] than bad.”  So true.  I slowed down a bit (if I could go any slower) at each of the spots along Boylston and said a small prayer.  It was very emotional and to see the spirit of Boston come alive for all 26.2 miles was the best tribute of all.

Thank you to all my friends and family who came along for this ride.  Many joined in with the campaign for supporting the Melanoma Foundation of New England – and for that I was overwhelmed and grateful.  (FYI – we are now over $400K!).  And many joined along on my endless Facebook posts and e-mails.  I am sorry about that but I think after a while everyone got used to it and had fun with it (just like I did).  And on the day of the race I gave up trying to keep up with all the texts, e-mails and Facebook comments.  I have so many great friends and family and everyone realized how important this race was for all of Boston and all of America.  I thank you all for the comments, “Likes” and support!  You are all awesome!

Wicked Awesome!! B is for Boston!!

Boston or Bust could be Boston after all.  Knowing my aging, larger than desired and injury prone body is never going to get to a sub 8 min per mile pace for 26.2 miles to qualify for the Boston Marathon I went to Plan B.

Each year the Boston Marathon selects twenty-nine organizations to raise money for charity.  In return they distribute a limited number of race numbers for individuals who are raising the funds.  So…Plan B had me applying to two charities that hit close to home – the National Multiple Sclerosis Society and the Melanoma Foundation of New England.  It is not at all easy to be selected.  They only have around 30-35 team members per charity.  And you need to guarantee a minimum amount of money you’ll raise, write a personal essay on how you are connected with the particular charity and be interviewed by a selection committee.  They then go off and deliberate and let you know.  As you can imagine, the applicants this year are through the roof given the horrible events this past year.  But after all of this and after months of waiting, this week I was selected to be a team member of the Running for Cover Melanoma Foundation charity!  [Plan] B is for “Boston”!  Holy *hit!  I’m running the Boston Marathon this April!

I think this is beyond belief not only because I will get to fulfill a bucket list dream of running in this marathon but I’ll be raising funds for a disease that could have taken my wife from me and my family not too long ago.  Even I took it in stride early on as we’ve all most likely had spots checked, frozen by liquid nitrogen and such.  I don’t take it lightly any longer.  You may not know this but if the cancer that has been found and diagnosed as Melanoma spreads beyond the local area into another organ and reaches Stage IV the prognosis has survival rates of 7-19% of making it five years longer.  In layman’s terms – those aren’t good odds.  This is cancer.  When her spot started to spread significantly (50 cent piece size) they took a big old chunk out of my wife’s calf to try to make sure this sucker didn’t spread any further.  She is very lucky to have caught it early and had it treated.  And now, I feel lucky to be able to give back to the charity to raise awareness and try to find even better treatments to eliminate this disease.

Here is where I need your help (keep reading; and then click link below or click here:  http://www.crowdrise.com/mfneboston2014/fundraiser/paulgourley).   I’ve been writing these blogs for the past 3 years or so.  I try to brighten people’s days and make them as light and humorous as I can.  Remember the “Got a Hemi in There?” one?  Or maybe the “Get in Mah Belly?!” one?  Or there is always the classic “Crop Dusting” issue?  I’ve also had several serious moments when I wrote about getting caught in Mumbai while serious bad guy terrorists were bombing three parts of the city where I had just been.  (Yes, they may have been chasing me – or so I thought.)  And of course the most relevant to this blog – last year’s bombing of the 2013 Boston Marathon.  It has been fun and sad to write all of these and now I think I’m nearing the final six point two miles.  I’ll write more between now and April 21, 2014 (Patriot’s Day) when I run this year’s race.  And I’ll also be asking for you to help me raise funds for Melanoma and to support my efforts and America’s stance against terrorism.  Think of it as a way of saying to these nuts (in a powerful way) that you may have tried to break our spirit but once again the people of Boston and all of America proved that we are unstoppable.  We go on and on and on.  And we will continue to do so.

Here is a link to team Running for Cover’s donation site where you can join my team and contribute.  I’ve never asked for donations on any other run or event I’ve done and kind of feel strange doing so now.  I’ll also commit to not asking you again in the future!  But I do need your help.  This provides a strong combination of supporting Melanoma awareness and research and making a statement in support of my efforts in this year’s Boston Marathon!  I’d appreciate anything you can do.  And I’d also appreciate it if you’d tell your friends about my efforts and pass them the link so they can join in.  Thank you!

Skin Cancer Prevention Tips:  Instead of Running Updates I am shifting gears and giving you all a few tips to prevent skin cancer each blog post.  Some of this is common sense but even if it has you putting on sunscreen on a more regular basis I’ll call it success.  Here you go.

Early detection of melanoma can save your life.  Carefully examine all of your skin once a month.  A new or changing spot should be evaluated.  and click the link above to help Paul.  Or click here:  http://www.crowdrise.com/mfneboston2014/fundraiser/paulgourley  🙂 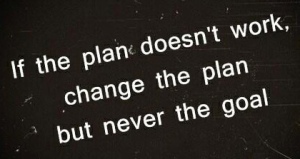